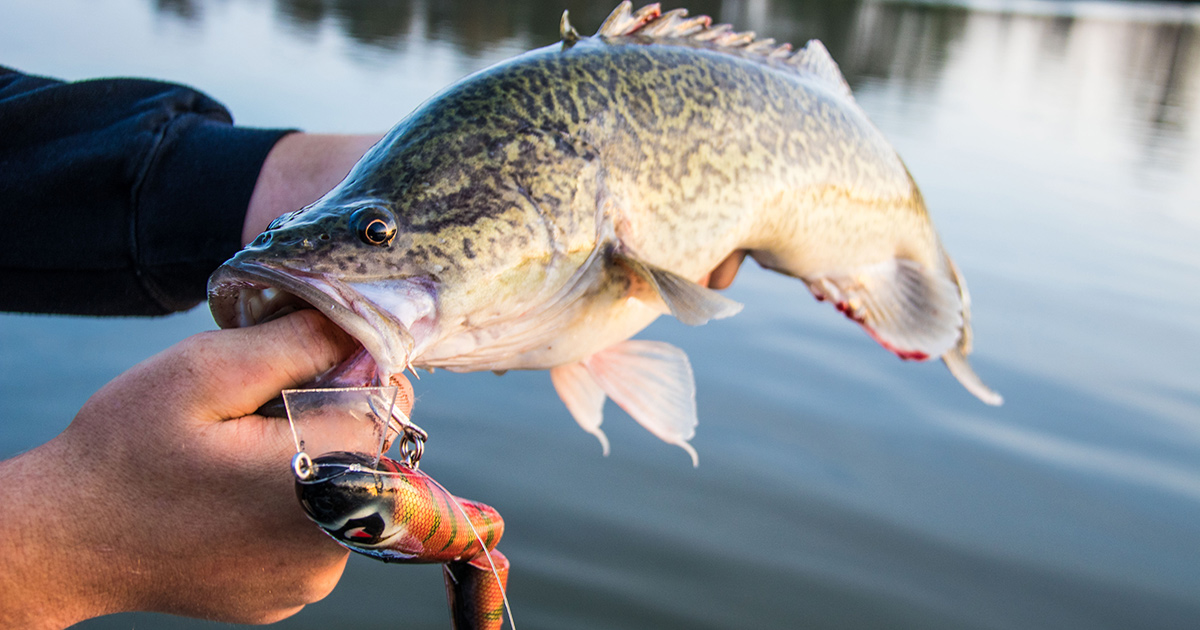 When it comes to catch and release, the fishing gear used and your handling techniques play a crucial role in maximising the post-release survival of fish. Research shows that fish are more likely to survive post-release if they are shallow-hooked or lip-hooked as opposed to deep-hooked. Deep-hooking is a key cause of mortality in released fish and occurs when the hook becomes lodged in the gills, throat or is swallowed into the stomach. All fishing in the GoFish Nagambie fishing tournament is catch and release, with the exception of carp which cannot be returned into Victorian waters. To ensure all caught and released fish live to swim on another day, we have pulled together our top catch care tackle tips including lines, hooks and nets.

Tight Lines
Actively fishing with a tight line can significantly reduce the chance of deep-hooking. Using an appropriate line weight for your target species can also ensure the fish is not played too long. Landing the fish quickly reduces the chance of the fish becoming too fatigued and stressed.

Hooks
When bait fishing, using non-offset circle hooks and barbless hooks reduce the damage to the fish’s mouth and are generally easier to remove quickly. Using artificial lures reduces gut hooking and changing the treble hooks to single hooks is an option.

When removing the hook from a shallow-hooked fish, use long-nosed pliers or other unhooking gear to quickly and gently unhook the fish. It is best to keep the fish in the water while unhooking where possible.
If the fish is deep-hooked,do not try to remove the hook. Instead, cut the line as close to the mouth as you can and leave the hook in place. Over time, hooks will rust away, dislodge or pass through the fish.

Nets
When you land a catch to measure and photograph, the type of net you use to support your fish between landing and measuring can impact their survival post release. A knotless or fish friendly net, made out of a smooth PVC mesh, can significantly reduce the risk of damage to the fins, scales and mucus layer.

When practicing catch and release, one of the best ways to give the fish a better chance of survival is to keep the fish in the water for as long as possible. We’ve put together some of our top tips to keep your catch wet so they can keep on swimming. Before you launch your first cast, be prepared to land a big one. Have a knotless net, cod gloves, a wet cloth and hook removal device ready for when you reel in your prize-winning catch. The more prepared you are, the quicker your catch will be able to swim away.

Reduce fight time by using heavier gear and a tight line. By landing the fish quickly, you can avoid playing the fish to exhaustion which reduces stress on the fish and increases its chances of post-release survival. Using circle hooks and barbless hooks as they reduce the damage to the fish’s mouth and are generally easier to remove quickly.

When handling your catch, you can help the fish to recover by minimising air time and keeping it in the water for as long as possible during handling. The best way to allow the fish to recover while you remove any hooks is to use a knotless, fish-friendly net. Knotless nets are often made from rubber or a smooth PVC mesh which reduces the damage to the fins, scales and mucus layer. They also provide support to the body of the fish reducing internal injury to its organs.  Aim to have the fish back in the water within 30 seconds.
When you’re ready to handle the fish, whether you are removing a hook or taking a photo, ensure you have wet hands or a wet cloth ready to minimise damage to the outer body.

For more best practice handling tips, don’t forget to check out the Care for Cod campaign by VRFish, Victorian Fisheries Authority and Native Fish Australia. When practicing catch and release, adopting better handling practices can help our iconic cod to survive post-release. To read more about the Care for Cod campaign, visit the VRFish website https://www.vrfish.com.au/education/campaigns/care-for-cod/

After a long fight, fish can be exhausted which can impact their ability to recover quickly and swim away. Their recovery is a major impact on their post-release survival. If the fish is struggling to hold itself upright and unable to swim away, this is a key sign that it needs to recover. We’ve put together some of our top tips to revive your catch so they can keep on swimming to fight another day.

A knotless net is best but if you do need to handle the fish, always use wet hands or gloves to minimise any damage to its skin. Minimising the time the fish is out of the water is essential. To begin reviving the fish, gently hold or slowly push the fish through the water in a slow figure-eight motion to allow a good flow of water and oxygen across its gills.

If there is a current, face the fish upstream and towards the current. When the fish is recovered the fish will generally swim away under its own accord or a by a quick snap of its caudal fin.

European carp are a noxious pest species and cause major damage to the quality of inland waterways as well as our iconic native fish populations. Carp are extremely prevalent in the Murray-Darling Basin and are a dominate species as carp populations exceed 350 kilograms per hectare in some areas which is why they are often referred to the ‘rabbits’ of our inland waterways. As carp are bottom feeders, they stir up mud and silt as they feed and make the water muddy which impacts water quality, vegetation, native fish and invertebrates. They outcompete with our beloved natives as carp can produce up to one-million eggs per year!

Carp have a negative impact on recreational fishing opportunities, many anglers often see carp as getting in the way of the natives they really want to catch. On the other hand, some anglers do specifically target them and kids love reeling in a huge ‘mud monster’! Carp used to be the prevalent species caught in Nagambie Lakes but thanks to extensive native fish stocking by the Victorian Fisheries Authority and support from local angling clubs the waters have become the native fishing hotspot that we know today.

At GoFish Nagambie, carp are the only species which will not be released back into the water with the intention of clearing as much carp as possible from local waterways.  As they are a noxious species, carp do not have a size limit or bag limit for recreational fishers. Fishers are not allowed to return live carp back into the water, instead anglers should humanely kill the carp immediately. The catch is still to be logged via the GoFish Nagambie App. It should be thoughtfully disposed of or brought to the GoFish Nagambie Festival Hub where the fish will be logged and appropriately disposed. Given the number of anglers expected for GoFish Nagambie it is recommended not to return dead carp to the river.