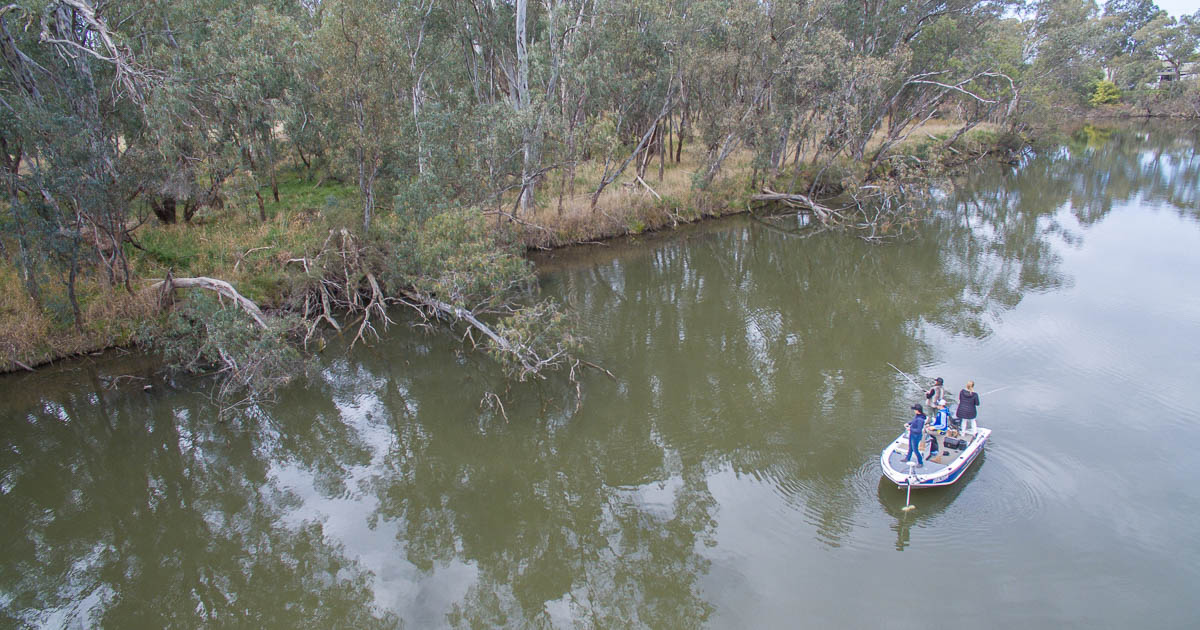 Trolling is a technique well worth using in the GoFish Competition! Rhys Creed has a look at some the best trolling hot spots and the gear to get the results at GoFish Nagambie.

The lake is fed by the Goulburn River which snakes its way through the system. It’s always the deepest part of the lake and therefore a refuge and hunting ground for fish. They will move into these areas when it gets too hot and also when it gets too cold.

The best way to target these fish sitting in deeper water is to troll. Plus your lure will always be in the zone when trolling this means you’ll have more chance at catching fish.

WHERE SHOULD I TROLL?

As mentioned, the river channel is the best place to troll… but there is a lot of river? What you want to do is look for a few key things:

1. First of all try to find a ‘run’ (a length of bank that you can troll) that has structure. In Nagambie there is a mass of standing trees and these can be seen throughout the shallow sections of the lake. In some sections though there is standing timber right on the edge of the river bed. The best kind of timber will be what you can find down deep using your sounder. Pick a spot and do a run, if the section of water you chose comes up with heaps of timber – perfect!

2. Second of all you want to target the outside bends, these are usually the deepest have the most timber and the biggest fish.

3. Third – you want to look for overhanging trees and shade. Cover from above is very important for a few reasons. Thick gum trees create shade down below, they drop limbs which become structure but most importantly, food falls from above and into the water. You’ll find in any form of fishing for Murray Cod that you’ll find more hungry fish in areas below thick overhanging tree cover.

Trolling depth is important. The river bed in the lake can reach depths up to 11m and averages 7-9m of depth. When trolling the river bed you want to be fishing on either side of the channel, rather than the middle.

Each side of the river bed is where the original trees lined the banks of the Goulburn River, so these would have all fallen in and would be littered on either side, whereas the middle of the channel will be much barer.

The best depth to troll is anywhere from 4-9m but it all depends on the depth of the channel just out from the drop off. So that’s the rule you want to follow… find the river bed and it will drop off really quickly from the flats. You want to be trolling right next to that drop off in the deep water which could range anything from 4-9m of depth.

WHAT SHOULD I TROLL?

There are a mass of lures on the market that you can troll and they will work. Below I’ve got the top three type of lures to consider:

1. 60-120mm Diving Hardbody Lures – this is the first choice as it will give you the best chance of catching both smaller and larger fish. If you want to catch smaller cod and golden perch use a lure between 60-90mm, anything over 90mm will attract larger Murray Cod above 70cm but you’ll still catch all sized fish. My pick would be a 90mm Balista Dyno, 70mm & 90mm AC Invader.

2. 120mm Plus Diving Hardbody Lures – if you’re only out there for the giants then use lures in the 150mm range, even up to 200mm. These larger lures will emit a giant thump and will attract larger fish. 120mm & 150mm AC Invaders would be my pick of the lures in the 30ft bib, perfect for this application.

3. 1oz Spinnerbaits – now this usually isn’t my preferred pick of the lures to troll but in recent year many anglers have been landing some great fish trolling spinnerbaits. It take a little bit more concentration as they sink rather than float and you need to set your speed correctly, but they are well worth a crack. Anything in the 1-1.5oz range would suit the depth of Nagambie perfectly.

That was a fair bit of information but all valuable considering the prize money that up for grabs. Take note and even though trolling isn’t always as fun as casting it could be the technique that helps you take home that grand prize.