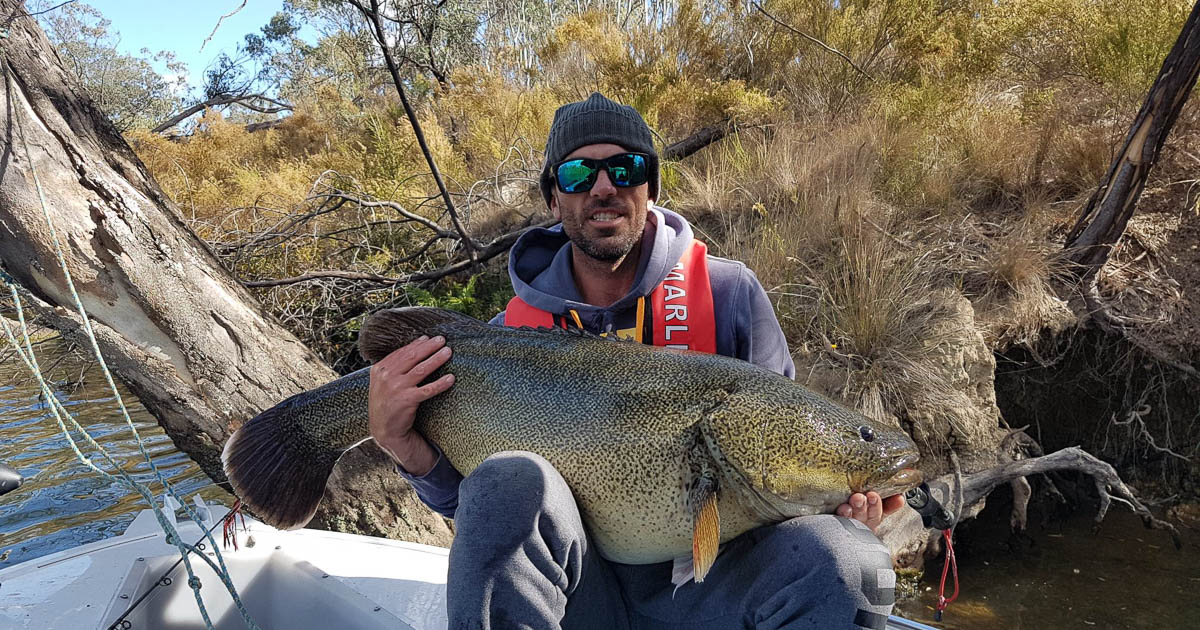 This man took home $80,000 from the inaugural GoFish Nagambie. There’s been controversy surrounding the lure he used and there’s been every conspiracy theory under the sun surrounding the winning 110cm Murray Cod he landed. We’ve asked this absolute legend, all the questions you’ve been asking us.

Check out what Clint has to say and here once and for all, what the lure was that he used.

Clint is the guy we’d all love to hate, truth is, we’re all just jealous. He is the lucky bugger who won a life changing amount of money for doing something that we all love, fishing. Unfortunately for us, he makes it impossible to hate him, he’s an absolute legend and the kind of guy everyone wants to be mates with. He’s a down to earth family man, who stayed true to his word and split the cash with his mate he fished the comp with.

Learn more about Clint and check out what he has to say.

I’m a concreter from Albury but grew up in Western NSW in a small town called Tullamore. I have a wife and two daughters. My eldest loves fishing almost as much as me and was with me in the comp. My wife and youngest daughter aren’t quite as keen but might be a bit more interested now. I love my fishing and being out on the water. In fact, much to my wife’s disgust, I actually keep my rods in my walk-in robe and refuse to let her take them outside.

There’s controversy surrounding the lure you used, settle the debate. Which one was it? AC Invader or Spinnerbait.

Sorry everyone, but it was 100% a spinnerbait. I didn’t want to reveal what I had caught it on until after the competition.

…and how can you forget such a thing?

Well if you look closely enough at the photo, it is slightly obscured by the tail, but you can see the red and black spinnerbait that I caught him on. On the Saturday night there were rumours floating around that I had been knocked off the leader board by a 120 + cod. I was gutted. My mate said to tell them you got it on a lure. As I was walking up on stage, I felt anxious and disappointed at the thought of possibly losing $80000, so when asked what I caught it on I said an AC invader. But at the end of the day, it would not have mattered the fishing was tough and a lot of people were trying a lot of different techniques to try and land a fish.

Now, tell us straight, it’s legit isn’t it? What time of day did you catch it, where abouts? Did you move around or stick to one spot? Were you going after the big cod? Basically, we want to know what your strategy was for the comp.

At around 12:30 pm on the first day of the comp, we stopped in the river not far from the ski club ramp for lunch. By this stage, tensions were high and stress levels were through the roof. We hadn’t had a bite. It was cold and a little rainy and the kids were starting to complain.

Throughout the morning we had been switching up from trolling to bait fishing and decided to stop and have a bite to recoup. While we ate, we (my mate, kids and I) put some bait lines in for cod. We hadn’t been getting any bites all day so I thought I might as well throw a spinnerbait around while the kids finished their lunch. However, it was pretty blowy on our side of the river and the other side looked better so we moved over and I started to cast out. After about 3 casts, the fish took the spinnerbait. At first, I actually thought it was a yellowbelly. He gave me a bit of a run for my money, wrapping me around a log a few times but eventually we were able to land him in the boat.

There were probably about 5-6 boats that came over to see the fish. There where also 2 men in another boat from Tatura who actually saw me hook the fish and land it. It was quite funny because when they saw me hook it one yelled out to ask if it was decent. At that stage, it hadn’t really given too much of a head shake so I yelled back that I thought it was a yella and it felt like an ok size. It wasn’t until the tip of my rod bent over and touched the surface of the water that we realised it was a big one! At that stage, we were happy to catch anything but we were always after a big cod.

Have you received the $80k? What’s the plan for the cash?

My mate and I had an agreement before we went in the comp. $50000 goes to the person who catches the fish and the other person gets $30000.  I really didn’t think we would catch the winning fish but either way, it sounded really good to me. and as for the $50000, we will be using that to help build our new home.

Did you catch anything else during the competition?

Unfortunately, no, we didn’t catch anything else, but we did have a couple of bites on Saturday.

Did you get into any other aspects of the festival?

Yes. We spent Friday and Saturday night at the festival hub to have tea. We checked out what was on show with the fishing stores. I have to say I was blown away, I didn’t expect it to be so big. There were a variety of stores and there was always something on for the kids and the food was great too. For our kids, the highlight was probably the fireworks on Saturday night. Overall the atmosphere was really positive and family friendly.

Where do you usually fish? Had you fished Nagambie before or was it beginners’ luck?

I generally fish the Murray River and the Hume Wier around Albury – Wodonga sometimes venturing to upper Murray and down to Bundalong and Mulwala.

I have never fished Nagambie before so it was definitely beginners luck.

What’s it like seeing your face all over the fishing world? Surely the pool room has had to grow for the all the newspaper, magazine clippings and that giant cheque.

It was quite surreal; you never think that it’s going to be you. It still is pretty mind-boggling, you keep running the whole event through your mind and thinking about how lucky we were not only to win but to get the fish in the boat with every possible thing that could have gone wrong. I still do have the big cheque and it lives in our lounge room at the moment, but in our new place, it will be hung up in the shed for sure.

Did you enter the comp with the aim of winning? What made you want to do it?

Of course, I hoped to win, but I never really expected to. I was just looking forward to spending time with my daughter and having a few beers with some mates. I was looking forward to fishing a new area, but I definitely didn’t think I would win.

The actual guarantee that someone was going to win $80000, which didn’t matter what size cod was caught, just the biggest, did attract me to the competition to start with though, and even if I wasn’t to win that prize there were so many other prizes on offer which made it worth a try.

Are you returning to defend your title? What’s the training regime like?

Yes, I will be returning to defend my title. I can’t wait to see what’s on offer.

I haven’t started training yet but maybe I should do some weight lifting – getting my daughter to run around the yard hanging onto my line, trying to drag her back to the tip of my rod. No, I have just been trying to get down to the river whenever I can.