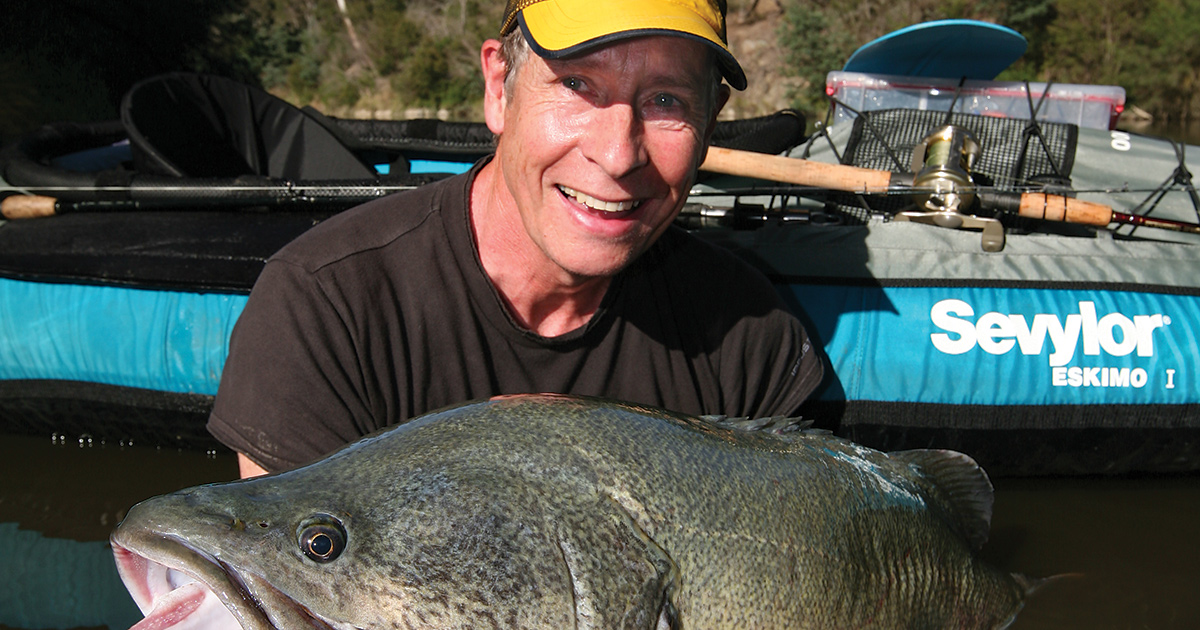 TELL US A BIT ABOUT YOU, YOUR CAREER AND HOW AFN CAME TO BE?

From 1987 to 2000 I continued work as a Roof Tiler until moving over full time into AFN.

Back then trout were easily the No 1 target for freshwater anglers and even bass in NSW were bigger than cod.

We slowly pushed cod as they became bounced back and became more widespread and popular.

Back then there were virtually no Murray cod in impoundments in Australia.

MY DEFINING FISHING MOMENT IS

Strange, but probably getting into television. It’s very difficult doing a TV Show – fish generally don’t like cameras! I started very late too, probably 55 before I got really involved and being in front of the camera wasn’t a real driver for me. I had worked with Rex a couple of times over the years and of course did a series of How To Tactics DVDs.

But – TV has really taught me to be organised in my fishing – anything less and you’ll fail. It’s also taught me to be practical and be very adaptable. Take your opportunities and make the most of them.

I loved working with Alvey last year – they are an iconic Aussie company – and I just love surf fishing.

Equally my first Murray cod out of the Billabong creek (probably only a 45!) was defining – they were a rare commodity then in the 70’s.

I KNOW I’M ONTO A GOOD FISH WHEN

When a bite becomes just a continuous run. Braid is just something that gives you so much better feel than the old days with mono.

The Kimberley last year was a perfect example when you’re expecting a 2kilo reef fish and you get hit by a 20 kilo GT! It just loaded up and kept going.

THREE BITS OF GEAR I COULDN’T LIVE WITHOUT ARE…

MY LURE OF CHOICE IS

I just love fishing all lures and in my job I need to know and understand how to fish them in all situations – salt and fresh – big small – heavy and light.

If I had to nomination one style of lure give me my spinnerbaits – especially my over-sized suspending baits – big cod just love them!

MY CAREER HIGHLIGHT IS

I don’t know, maybe it’s not happened – maybe it never will! Lots of highlights – but if I had to nominate it was probably hooking and losing and SEEING a 30 pound brown in the Huon river in Tasmania.

That’s motivated me for years – I now know that they exist in Australia!

THE AFN FISHING SHOW TAKES YOU TO SOME AWESOME LOCATIONS, WHAT ARE YOUR TOP 3 SPOTS THAT AUSSIE ANGLERS MUST FISH

THERE’S BEEN 159 ISSUES OF FRESHWATER FISHING, WHAT’S BEEN A HIGHLIGHT STORY?

Probably the one on going to New Zealand and poaching their mega trout in the canals. I just loved doing a detailed map on where to go and how to do it! I was the camera man on that trip and Nige and I had to work it our for ourselves.

He got a 37 pound brown that I filmed and I got a 29 pound brown just before we went home. We got a great TV show and a great article.

Lots of Aussie anglers have since gone there motivated by the article and used my map and had great trips as well.

EVERY AUSTRALIAN ANGLER HAS SEEN AND IS JEALOUS OF YOUR BOAT. TELL US ABOUT IT AND SOME OF THE MODS YOU’D RECOMMEND TO ANGLERS?

I’ve been lucky there as it’s a US bay Boat and came pretty much fully finished (as most US boats do – the reason why I bought it!)  It’s a Bluewave – Pure Bay model and is some 10 years old now – in my opinion Bluewave are the best in the world. (I’ve driven to Hogan in it one up – all I needed was a wet suit and it got me there and back!)

Having transducers at and on the bow make that bow mounted Lowrance really useful.

Keep casting and keep expecting – then you won’t miss it.

I’m no different to anyone – sometimes it’s 1000 casts between fish! I like to just pepper – Get them over as quick as I can then get into a bite that gives one every 20 or so cast!

Mind you goldens can be much for forgiving though.